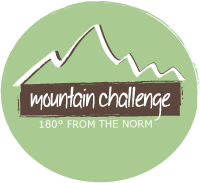 Running, bicycling, hiking, trail running, climbing—
are all activities I have enjoyed for many years.

Early on I realized these sports not only kept me physically fit, but mentally fit as well. Combining physical elements into my work life began immediately after graduate school. During the early 1980s, this meant using exercise prescriptions with many of my clients. During the winter of 1985, I learned some valuable lessons using the wilderness with some work at the North Carolina Outward Bound School. By the fall of 1986, I wanted to do more work with groups and the wilderness without the long commute to North Carolina.

During the fall season of 1986, I used the Wesley Woods adventure facilities and worked with about 30 mostly corporate clients. The director of the Wesley Woods facility and I were excited about the promise of this arrangement and spent the rest of the winter and into the next spring talking about the possibilities. Two significant developments in our history started in 1987. First, following a cabinet retreat using Mountain Challenge, the new president of Maryville College asked what it would take to move Mountain Challenge to the College campus (where I was already working part-time). Second, following
a ropes course for his supervisors, a plant manager for Sea Ray Boats asked what I’d like to have for my business. I told him that a ropes course on the College campus would be ideal. With his help we obtained a grant from the Brunswick Foundation and had our own ropes course planned, built, and operational by the spring of 1988.

The 1990s saw rapid growth. We moved from serving 1,000 people in 1990 to over 6,000 in 1999. We went from four to five contract staff in 1990 to nearly 50 staff today. We’ve become an important part of the Maryville College curriculum. We’ve become a part of several corporate university training programs. In 1991, we wrote a one-sentence mission statement that guides us to this day. In 1993, we added an Alpine Tower that has since grown into one of our signature events. In 1998, we redefined our relationship with Maryville College and added my daughter, Emily (then 4 years old), as a partner. Also in 1998 we articulated our principles in a document that supports our mission and affects all that we do. We became a two-time Tennessee Quality Award winner. The new millennium found us serving 10,000 participants by 2005 and questioning the amount of growth that for us would be sustainable. Instead of an ever-thickening policy manual, in 2006 we committed ourselves to a written covenant. Like nearly everyone else, we felt the effects of a tough economy. But, we find ourselves still standing and moving forward as the second decade of the 21st century arises.

Here’s to another twenty-five years of being the region’s premiere outdoor adventure provider.